Massive technological advances have been made in the last 50 years which have made fishing safer but also made fishing more efficient.

Fishing vessel design has improved and boats are now far more seaworthy. Engines have massively increased in power and efficiency. Technology such as VHF radios and satellite phones have made communication much easier.  Navigational aids such as DECCA and more recently GPS mean that fishermen can accurately return to good fishing grounds, and can fish much closer to known hazards such as rocks and wrecks. Manmade fibres such as polypropylene fishing net for trawls and monofilament gill nets have also revolutionised the efficiency of fishing gear.

Following international over-fishing of our seas it is fortunate that in European waters we now have much higher levels of fishing management than elsewhere. The European fishing fleet has been through a painful but necessary process of restructuring, and many vessels have been decommissioned.  Thanks to better management and industry-led initiatives we are now seeing the recovery of many stocks of commercial importance, and local fisheries management through the Cornwall Inshore Fisheries and Conservation Authority is among the best in the country.

A recent national projcet called Project Inshore looked in detail at inshore fishing all around Cornwall's coast, and features a good summary of the current situation in Cornwall (link at bottom of this page). In A Review of Cornwall’ s Agri food industry (a detailed report on Cornwall’s fishing industry published in 2010 by the University of Exeter and Cornwall Food and Drink) Nathan de Rozarieux summarised the Cornish fishing industry at that time:

"The Cornish seafood industry is of significance nationally as well as within the county. In 2009, based on the quantity in weight (tonnes) of live weight catch by UK vessels, Newlyn was ranked as the UK's 13th largest port. The live weight catch was recorded at 8,400 tonnes with a financial value of £16.5m. However, in terms of financial value Newlyn was actually ranked 6th in the UK, which demonstrates that although the landed catch weights are lower, the catch is of higher value."

In total, 11,905 tonnes of fish were landed in Cornish fishing ports in 2009 (MMO) which equates to a turnover of £27.7m. The change from 2006 figures demonstrates a small reduction in both the volume and value of landed catch, which seems to support industry trends.

The Cornwall Inshore Fisheries & Conservation Authority (CIFCA) 2009 survey of boats and ports revealed that there were 581 registered boats. Of these, 83% were 10m or smaller. There were 867 crew members employed on the boats, and of this number 67% were employed by boats 10m or smaller.

The mainstay of the Cornish fleet in terms of capacity (tonnage), engine power (Kw) and value of landings is the beam trawling sector, which although has reduced slightly in size to 20 vessels, still accounts for approximately 40% of the value of fish landed (Channel & West Sustainable Trawling Group figures, 2009).
Due to the larger size of these vessels - typically 24 to 28 metres in length - they are less restricted by weather and therefore provide the market and onshore processing sector with an almost continuous supply of fish. This is seen as essential for processors who can quickly lose market share if they are unable to supply volume consistently to customers. The main target species of these vessels are monkfish, megrim, Dover sole and cuttlefish, with a bycatch of twenty to thirty species ranging from high value species such as turbot and brill to the lower value pouting and ling.

The gill-netting fleet in Cornwall remains the largest in the UK, with 12 vessels of between 15m and 20m in length. The number of vessels has decreased slightly over time but the average age of these vessels has reduced as a number of newer vessels have joined the fleet in recent years. The main target species for gill netters are pollack, hake, turbot and monk.
The inshore trawling fleet of 10-12 metre, so-called ‘dayboats,’ has remained relatively stable but ports such as Looe have seen a slight reduction in the number of vessels as successful skippers have upgraded to larger vessels that cannot easily work from the tidal harbour. Catches from these vessels are highly mixed (up to 40 species in one day) and vary considerably during the seasons. For example, catches of John Dory in the summer, squid in the autumn, and whiting in the spring.

The sardine ‘ring-net’ sector has perhaps seen the most significant growth in landings and number of vessels. In 2006 only four vessels were equipped to fish for sardines with ring-nets, while in 2010 there were 8 vessels landing just under 2000 tonnes.
Despite the relatively high costs of building or converting vessels for this mode of fishing it has been helped by the growing market demand for PGI status, Marine Stewardship Council (MSC) accredited ‘Cornish Sardines’ and the availability of European grant aid (through Objective One and Convergence funding) to support investments by processors and catchers.
The other growth sector has been the increase in the number of sub-12m vessels fishing with handlines for pollack. Although this has been a feature of the Cornish inshore fleet for many years, this recent growth in activity has been spurred by pollack being widely reported in the media as a sustainable alternative to cod. This has resulted in an increased demand amongst local processors, with the knock-on effect of higher prices being seen atlocal auction markets. Operating costs for this mode of fishing are low, so profits margins are attractive.
Cornwall has the largest fleet of under 10 metre vessels in the UK. These mostly operate within 12 miles of land and are polyvalent in their activities, often switching between gear types in the same day for example going between potting, netting and handlining.

Until 1962 fisheries management  in UK Territoral Waters cas carried out by the UK government. But when Britain joined the EU, management of fisheries became a more political affair.  Many of the stocks that we catch are shared and migratory, and are also caught by EU vessels so a multinational approach to fisheries management is sensible. Many countries have historical records of fishing in our waters and the current system recognises these rights. The Common Fisheries Policy (CFP) sets quotas on the quantities of all main fish species landed. This cap has some undeniable fisheries conservation benefits. The problems come when vessels run out of quota and are then forced to discard fish for which they have no quota.  In Cornwall’s highly productive seas it is often impossible for fishermen to avoid catching certain species. The latest reform of the Common Fisheries Policy is set to ban discards. This discard ban will be very difficult for Cornish demersal fisheries in particular, and exactly how the ban can be brought in is a major concern for Cornish fishermen. 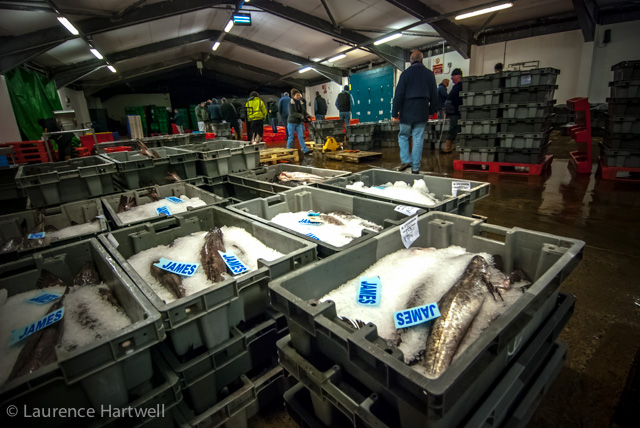